Feel free to leave feedback and questions below!

I’ve found myself playing roguelikes quite a bit lately. Namely Crypt of the Necrodancer, But, I want to talk about a different one today.

GALAK-Z. Think a modern version of Atari’s classic Asteroids but with AI controlled enemies, voice acting and all wrapped up into a set of fictional 80’s/90’s action anime VHS tapes.

It’s definitely something you don’t see every day, and that’s why it caught my attention when I saw it in a gaming magazine years ago. After reading that article, I figured it’d be a nice game to try out at some point.

And years later, I got a copy of it for free through Reddit user munki17. Thanks again!

So, now that I’ve played it for over 10 hours, is it Good, a Fad or just plain Ugly?

I’ll be straightforward and say some aspects of this game work, while others, not so much. The game itself is structured very much like a 2D Free-roaming Shmup like Asteroids from ages ago, but is mixed with a few other things. Such as AI controlled enemies and voice acting. It’s also advertised as a “Roguelike” as it has a permadeath mechanic in some modes, but I myself don’t believe it fits into that category. I’d call it an Action/Adventure title with Permadeath. To me, a roguelike has short, randomly generated stages, which this game does not have. On average one single stage will take five to ten minutes. This makes the Rogue mode, or the “Original” version of the game incredibly long by roguelike standards. It also kills off that “One more run” feeling that other titles, such as NecroDancer give. (Even though full four-zone runs there can be half an hour sometimes.)

The game is divided into four “Seasons” of five stages. If you die anywhere within these stages, it’s back to the beginning of the season for you unless you have a few “Crash Coins” which can be exchanged for an extra life. The only problem with this is what it does to your upgrades. They’re all removed and placed into one large container. Said container is usually guarded by high-level enemies. Granted, these situations have yet to end well for me. There is some “random” generation, but that comes in different levels being chosen for each stage. It’s entirely possible to run into the same stage again on repeat runs.

Arcade mode, added in a somewhat recent (5/6/16) patch, negates this restarting business with checkpoints after every level. Although, this isn’t free from problems either. As in Rogue, the first four stages of every season have several possible missions to cycle through, bringing in some nice variety. However, the 5th Boss stage is always the same. Enemy placement might be different, but the level structure is the exact same every time. This can get old, real quick. Especially if it takes a few minutes in order to even reach the boss.

The third gamemode, The Void, (Also added in the 5/6/16 patch) is actually my favorite way to play this game. It’s a go until you die kind of thing, with a true arcade scoring system, daily runs* and online leaderboards. It’s the kind of game one would pop in a quarter to play back in the day. There’s no end goal, other than to have the highest score overall.

Although, said leaderboards are incredibly lackluster as of right now. This is the worst one I’ve seen so far. 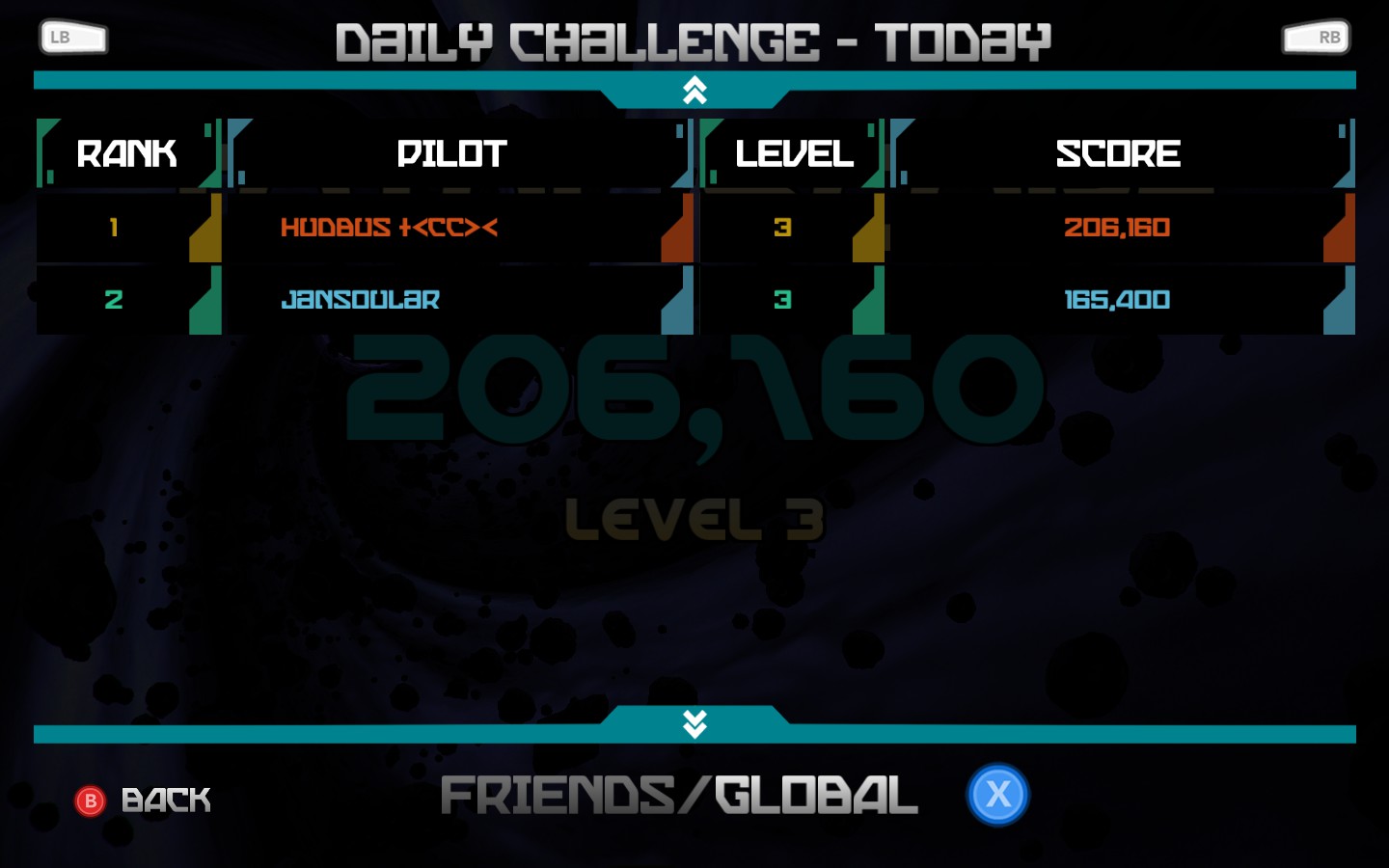 Enough about the gamemodes, I’d like to go into the gameplay itself.

Just like piloting an actual plane, it takes practice. You’ll be balancing boosting, strafing, forward and reverse thrust along with a “Juke” (Jump out of the playing field for a moment to dodge fire.)  and missiles.

Also, did I mention you get to control a mech along with your fighter craft? This thing allows you to charge up a massive sword swing, grapple both environment items, (Such as explosives, containers and the like.)  enemies and put up a front block shield that doesn’t count against your main shields.

You can swap in between these forms at will, allowing for dynamic combat. This really is where the game shines, but in order to get all of these functions, you have to clear the first season. I understand why this was setup this way, but I feel that it takes just a little too long to get going. That, and the system does take a little to get down, the learning curve is rather high with this title, but is rewarding as well. Do yourself a favor and use a controller for this title.

The voice acting is actually rather well done. Which I will admit took me by surprise, as the most comparable recent release I can think of; Nintendo’s StarFox Zero, retained the series’ famously campy style. That, and I’ve given a few other indie games with VO a shot, and some turned out rather laughable. (MST3K worthy stuff here.)

The soundtrack screams the late 80’s/Early 90’s. It fits perfectly. Other small touches, such as the options screen being designed off of a VHS setup screen and the season intros looking as if they came off a 10 or so year old VHS tape take this even further.

I’d say this is a good title, with a solid 8/10 on my scale. It has enough to keep you coming back with it’s voice acting, visual style, changing levels and a true arcade style mode. It does suffer from a high learning curve and repetition though.

*A few roguelikes have this, it’s a single set of levels that everyone gets. They are all the exact same and reset nightly.