…?
Oh, you wanted my usual review size. Well then:

Cave Story, released in 2004 as a freeware PC title. All developed by one man. It’s a 2-D shooter platformer in which you’re quickly dropped into Mimiga Village, populated by the rabbit-like Mimiga. Apparently, someone known only as “The Doctor” (who has no ties to the Time Lord, mind you) has been kidnapping Mimiga left and right for unknown reasons. Our amnesiac protagonist seems to be the only one with a chance at ending this. 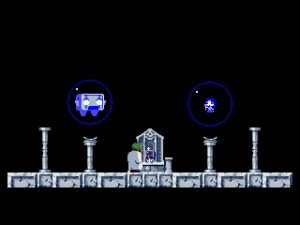 I can’t continue without spoiling anything. Do yourself a favor and Do. Not. Look. Up. The. Plotline. However, I will say it does have multiple endings depending on your actions.
The freeware version originally only shipped in Japanese. There was a translation patch made, which works, but does have a few grammatical issues here and there. This still doesn’t detract from the occasional bit of humor and character moments you’ll run into throughout this story.

Controls are as simple as it gets, as an NES controller would do just fine with this game. (Although you’d be hitting the inventory screen about as often as you would be in a Mega Man title.) Shoot with one key, jump with another. Shots can be directed and weapons can be swapped with a single button push. This is one of those easy-to-learn-hard-to-master kind of things.
You’ll encounter a total of 26 bosses. 8 of these guys are 100% optional though, as they can only be found either by a dialogue choice or by going through the hardest of the endings. Dispatching of these baddies can be done through several weapons, ranging from a standard limited ammo Missile Launcher to a… Bubble Gun. 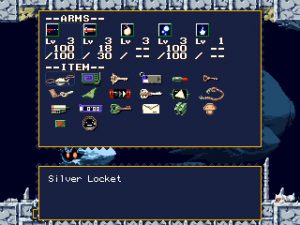 As seen noted above, Cave Story has a simple mechanic where you can Level Up weapons. This is based on EXP pickups that are scattered about or dropped by defeated enemies.
Taking damage, however, will cause you to lose EXP on your currently equipped weapon. The game keeps up a decent dance with danger, as losing too much health won’t only bring you closer to death, but will also make your current weapon weaker. 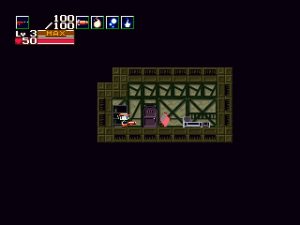 The game is designed much like the 8-bit titles of old in visual, audio and gameplay style. Metroid is an easy comparison. However, unlike Metroid, you have a map, secrets aren’t as hard to find, and the whole thing can be finished in about 5-7 hours depending on your level of completion.
The older 8-Bit titles were designed to be difficult for multiple reasons, and Cave Story does retain that difficulty in some ways. Boss fights may initiate when you least expect it, instant deathtraps exist all over a few areas and, later in the game, heal stations are much harder to come by. However, this isn’t at Super Meat Boy levels of difficulty. By the time you’ve reached the Final area, you’ve been equipped with enough knowledge to beat the game.
Graphically, the game is surprisingly detailed. Small touches such as the face of a bat when it’s attacking or character portraits really make this pixelated world feel alive, as cliche as that is, one can’t deny the truth. Balrog, possibly the first boss you’ll face, only gets half of his face in his dialogue portrait. Even then, his personality gets through.
The music is an absolute joy to listen to. With the main theme and Labyrinth Fight being my personal favorites. It’s upbeat, somewhat goofy when needed, but not afraid to be serious.
In a more modern sense, Cave Story is to Metroid as Undertale is to Earthbound. It takes well-established mechanics and places them into a small, lovable package of retro joy.
Does this line ring a bell? 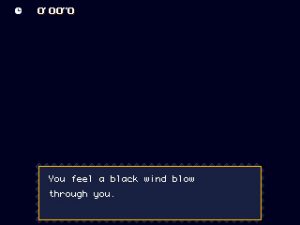 My one minor gripe with this game is the fact that the most satisfying ending is locked behind a set easily missed choices and a rather difficult end section that behaves exactly like a roguelike. Death in this last section boots you back to the start of it, no matter how far you were into it’s multiple rooms of crazy.

I myself have been at it enough times over that I have lost count. The sign at the beginning of the area noting “Welcome to Hell!” should have been a major tip…
I’ll finish it someday though… Regrettably with the help of a guide.
Other “secret” items hidden like this serve no purpose. Life upgrades can be found with some simple exploration though.
Cave Story gets a Good solid 9.5 out of 10 in my book. With strong callbacks to the golden age of games all wrapped up in a short, free package, one really can’t go wrong. Unless they try to go for the hardest ending as frustration can easily settle in.